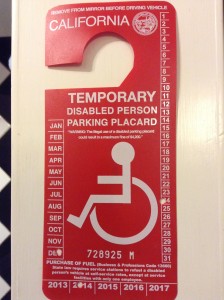 As you may recall, when Taylor first returned to Los Angeles from Craig Hospital, she was still in a wheelchair.  It actually is a BIG help to be able to park in one of those large handicap spots if you have to wheel a wheel chair next to the car to get your passenger in and out.  Thus, we applied for a handicap placard when Taylor first returned home.  I remember when we went to the DMV to get the handicap placard with Taylor.  We had filled in the application to get the temporary placard.  When she saw this, the woman behind the counter helping us said, “Are you sure you don’t want to get a permanent one?”  “No!” we said.  We definitely wanted the temporary one because we only wanted positive energy that Taylor was getting better.  It struck us as strange that we, not a physician, could choose whether we wanted a temporary or permanent placard.  Also, it cost $6 to get the temporary, whereas there was no cost to get the permanent placard (no wonder the system is abused).  The first time we tried to use the placard at one of Taylor’s doctor’s appointments, all the handicap spots were taken, despite there being 2 long rows on 2 different floors of designated spots!  We ended up parking in a regular spot, which happened to be barely large enough for me to move Taylor’s wheelchair between our car and the next car.

Well, yesterday, Christmas Eve, Taylor’s temporary handicap placard expired, and we are not renewing it.  If you have been following our posts, you will know that Taylor has been walking for some time now.  She is even getting into and out of cars by herself and can buckle her seatbelt by herself about 75% of the time.  Good-bye handicap placard!

It’s hard to believe that it’s that time of year again. Last Christmas was the last time that we saw Taylor before her accident.  I remember we climbed the Culver City stairs, which are a set of very long and tall steps going up a hill, and looked out over the hazy (smoggy?) city of Century City.  Taylor had climbed the stairs before, but this was my first time, despite having lived in LA for over 10 years!  Of course, she would not be able to climb all those stairs again this Christmas, but she will be able to again one day, as she continues to get stronger and build more balance.  She has recently been working on climbing stairs with only one foot on one step at a time and without using the handrails.  She has even climbed 4 flights of stairs in the parking garage to my car at work when the elevator was out.  This was tiring for her, but she could do it, and little by little, she gets a little bit stronger.

We also have been making Holiday cookies, which is actually very good occupational therapy for her because she needs to use her fine motor skills to roll, cut, and decorate the cookies. 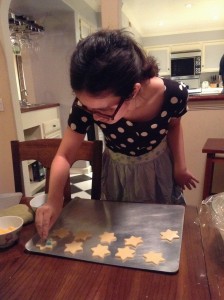 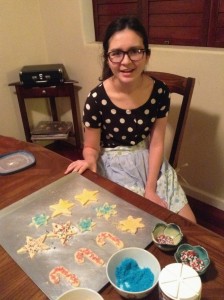 We wish everyone Happy Holidays, and thanks for keeping up with Taylor!